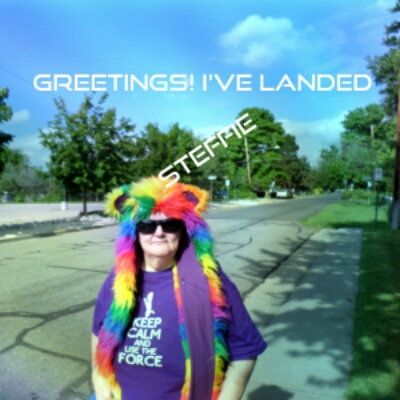 I “came out” in the 1970’s when life was like living in a “Star Wars” scene; very dangerous and risky for gays (Jedi) in mixed company. I set my course and learned the way of the Rainbow Force. In combat training as an Army Military Police, I learned weapons, tactics, and crises intervention.

I dedicated myself to peace and being there for others in their time of need up to and including the “spirit side” 👻. I never start a fight; but I know how to resolve and neutralize one.  I studied a wide range of subjects and was eventually accepted and ordained as a Jedi Knight. Cool, when one considers I can marry two hearts. 💜💜

The whole outside Jedi came together when I watched “Shark Tank” and Spirithoods presented their product. I had to have a Spirithood for my growing hat collection! This stunning, rainbow-colored Spirithood was there on the website and I officially declared my Tribe.

A few days ago, a flash of insight hit me and my Spirithood had a name, Verda. I washed her and officially named her after my adopted mother whose name means “truth”. I gave her my four earrings to wear for me. My peeps know I always wear different earrings in each ear, rarely a set. Verda carries on my tradition and magic is afoot when she graces my head. Mother couldn’t walk in life; but she can with me now. Is that creepy or poetic?

I am going to the Denver PrideFest as the Jedi above and I invite all LGBT to come and celebrate. Don’t forget to introduce yourself to me! I’m thinking I won’t be hard to spot near The Center at parade time on Sunday. I love love love PrideFest! Being surrounded by my people in open spaces is wonderful, and feeds my soul.

Of course, there will be photos. 😁

One thought on “PrideFest 2015 In Denver”