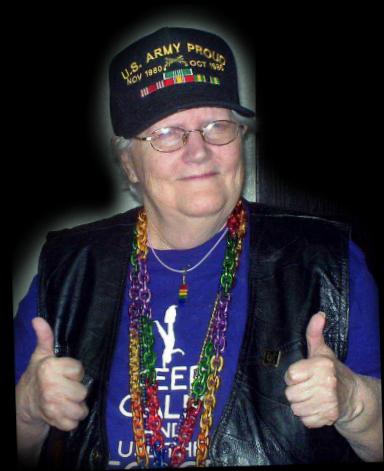 I entered the service in 1981 in California. I went to Basic Training at Fort McClellan in Anniston, Alabama (not an active fort now) where they trained chemical and the military police units. My enlistment was going great until I got transferred to Walter Reed Army Medical Center in Washington DC.

Upon my arrival from Germany, I sat across from the 1st Sgt for a meet and greet. At least, that is what I thought it was until the conversation turned to a letter that he had received from my X husband, who was also in the Army.  As he read me the letter, I felt blindsided by what R** wrote. He told my new duty station that I had threatened his wife and that he wanted to alert them about me.

A little background: I had divorced my x because after he had physically, mentally, and emotionally abused me,  I turned to the Army  to regain my self respect and I was a lesbian. I had been court ordered by the state of VA to turn over my children to my abuser.  You see, if I had said anything at all about being a lesbian during those proceedings, I would have been thrown in jail. As a matter of fact, the day I put my children on the plane to their father, my lover and his future 3rd wife, was with me. I felt so defeated by the whole scene and it would be years before my children understood the real reason for our separation.

I had already suffered under his hands when we were married, now he was trying to destroy my career by writing a BS letter to my new duty station from Berlin Germany. The abuse continues. Again, I couldn’t reveal the real reason behind this letter. My x  knew he had married my x lover and HE was the stalker. Even the military helped my x husband, by making sure his new duty station is close by mine.

I was told that if I did anything towards Pam that I would be severely punished. I assured him that I was not that type of person and as far as I was concerned, it was a mute point. I left his office and continued on my journey as a great soldier. During this duty, I served as a VIP guard in the hospital and desk sergeant. I eventually got involved in crime prevention and helped to fingerprint children for the McGruff program.

I studied to change my Acting Sgt. status to a real promotion and went to GA to attend the NCO Academy. I graduated in the top ten percent of a class of 200. Upon my return, I went before the NCO board to test for being a full fledged sergeant.  One day, I was called in front of the Provost Marshall and was promoted to Sergeant. A great day indeed. I was then approached by the deputy Provost who wanted me to go to Drill Sgt. School. This is a school that only the best can be recommended to go to. I tell you this, just so you know I was no slacker. I believed in paying it forward because the Army had shown me a way back to myself.

During this time, my x lover and now wife of my x, kept in touch via letters. You know what kind of letters you write when love exists, right? I never thought in a million years they would eventually come back to sabotage me.

There I was, updating a board in my office, when agents whom I have worked with from the Criminal Investigation Department, came into my office. They informed me that allegations of Laud Acts with Another and others had been brought against me. I was to report to their office for questioning. I was a deer in the headlights of a fast moving train. All the blood drained and I could barely move. What was I going to do?

I walked into the little office and was directed to a desk. The agent brought out letters, my love letters that I had written to C****. I was told that I would be given excerpts from the letters and that I would need to write those sentences and then they would be given to a handwriting expert. They were going to prove me a lesbian, and that I had signed my contract with the military, falsely. I knew I was in trouble and my whole career was about to be flushed down the toilet if I couldn’t pull off masking my handwriting. I knew that my x husband had found my hidden letters and had given them to the military. I was angry, afraid, and thinking.

I was given a pen and paper. They told me that 10 excerpts would be required. They started to dictate the most intimate and private parts of every letter they had. By the time I finished writing them all, I felt abused, betrayed, embarrassed and less of a person once again. I was confined to quarters when I was not on duty. Imagine what my life was like waiting for the results to come back. All of my brothers and sisters in arms that I served with knew I was under confinement. Was I going to be court martialed? Was I going to trial? Would I be stripped from everything I had worked so hard for? I now had a record. What would that do to my future? I barely was aware of anything else until I was ordered to report to my Company Commander with my 1st Sgt.

We both reported as ordered to my female  Cpt. company commander of the medical unit. Commanded to stand in parade rest, I faced a life crossroad. One way to jail, the other to continue my Army career.  She read me the charges and proceeded to verbally reprimand me for each. She showed me the paper that was signed and told me that the document would not go to my permanent record, but kept there in my company record. She said, “I have done something, yet nothing. You are hereby ordered to your next duty station in Seoul, South Korea”  My 1st Sgt and I snapped to attention, I said “Yes, Ma’am!” as I saluted, did an about face and walked out of her office. I was stunned!

How did I escape? Apparently, the handwriting exemplars weren’t enough to charge me. They wanted me out of there soon. I then realized that R** failed in his attempt to abuse me again. I was not going to allow him to do it again. When I arrive in Korea and if he is ordered there as well, I would have him killed. Imagine my state of mind after all I had been through. Well, obviously, I didn’t go through with it; the Army sent him elsewhere in the U.S.

I am sure there are others who went through something similar and some who went through much worse. I am so happy that what I went through finally stopped when the services were told to allow openly gay people into service. Again, I can be open.

It has taken many years to be able to tell my story. I love my country and I am proud to have served as a Military Police during the 1980’s. The wounds received are not awarded Purple Heart.

I did complete 6 years of service and was honorably discharged as an E5 (SGT) with my service record in tact.